Knowledge and Change in Islam: A Conversation with amina wadud 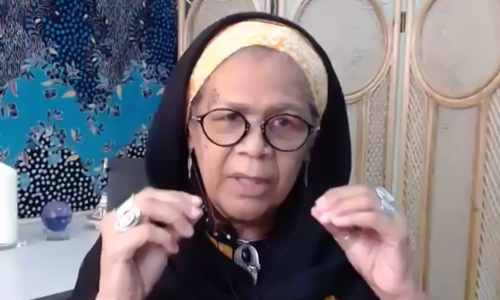 Islam has enjoyed a rich and varied intellectual history. Muslims have benefited from and been challenged by their unique location of agency in creation as both a sacred duty and a challenge towards growth and change. Beyond the power politics and narrow assertions of authority, Muslims must ensure that Islam as a living tradition meets those challenges and moves beyond stagnation. This is called Islamic reform. Gender and gender identity social movements have been one of the leading areas in this reform. These movements have come from a critical intersection of knowledge production and activism. This was the thought that became the spirit in holding a seminar entitled ‘Knowledge and Change in Islam: a Conversation with Amina Wadud’.

This seminar, hosted by the Indonesian Consortium for Religious Studies (ICRS) and the Graduate Program of UIN Sunan Kalijaga Yogyakarta, was held to celebrate International Women’s Day on March 8, 2021. The event also served to welcome Prof. Amina Wadud as visiting professor to UIN Sunan Kalijaga and ICRS. The moderator was by Dr. Faqihuddin Abdul Kodir, alumnus of ICRS and founder of Fahmina Institute and lecturer of Hadith Interpretation at IAIN Syekh Nurjati Cirebon. This event is also part of the series commemorating the fifteenth anniversary of ICRS.

In her presentation, Wadud argued that Islam is one of the richest religions in the world in the context of religious ideas. In this framework, not only is physical knowledge that is taken into consideration but also the metaphysical in how Muslims pursue, understand, and absorb and produce knowledge. Furthermore, Wadud argues that the aspect of knowledge production has stimulated her life work because she belongs to a tradition that starts with the receipts of knowledge in the form of revelation for the prophet Muhammad. After all, even after more than 14 centuries the wisdom of the Quran still shines bright. Wadud also explains how she fell in love with the Quran. It is almost fifty years now from the moment she took her shahada and she is still in love with the Quran, and she considers that as a blessing unparalleled by many things that people experience in their life. Wadud said, “I love the Qur’an so much. I went on to study for my master's and Ph.D. with a focus on the Quran and eventually I started writing books on the Quran. So how many people can have that many years to speak without that much love?”

Furthermore, according to Prof. Amina Wadud, when love drives knowledge there are no limits. The reality is that Islam is a dynamic system and for that system to remain excellent that dynamism must be maintained. She also argues that despite the wealth of knowledge that has come through the intellectual past, people must at every generation continue to contribute to that knowledge. People all over the world are now experiencing a global pandemic, however, people will learn things about the human community from this pandemic, unlike anything humans could anticipate. Moreover, Wadud remembers that just a year ago when she first came to visit the campus in February of 2020, she realized that people need to learn in integrated ways. It is now the time for  all the world’s citizens to consider what is the well-being of the human being. The human community itself presents us with many challenges of how to understand what knowledge is. Wadud mentioned, “Knowledge is not just Arnold Schwarzenegger and the terminator computer-generated bits and bytes of information. Knowledge is a deep integration of what we know to establish a quality of living that reflects what we know. It's like when you tell a child do not to touch the stove, it’s hot. Sometimes the child will listen. Other times the child will go and touch and when they do, almost immediately they learn how to say the word ‘hot’. It is because they know. In my estimation and with my bias, I believe that Muslims should always be at the forefront of knowledge pursuit, knowledge production, and also the absorption of knowledge for the benefit of humankind.”

Nevertheless, according to Wadud, the questions then become “How do we know? How do we know what we know? How do we even manage to develop an understanding of a thing?’ Here, the hermeneutical process plays an important role. Wadud explains that hermeneutics have interested humankind from the moment that humans began to be challenged by the environment. The human could have been challenged by something as simple as the moon passing in front of the sun and causing an eclipse. Is it night why just five minutes ago it was full-on day time? We pursue knowledge about our surroundings to enhance the way of knowing what we know, and we do what we do as humans on the planet. Wadud also emphasizes that in the context of the COVID-19 pandemic, anybody who comes up with a vaccination for the coronavirus cannot have it only for their people, it has to be for everyone on the planet because every country should share their knowledge as they have absorbed it and benefited from it for the benefit of all humankind. Therefore, Wadud said that for that reason, she is very pleased to return to the academic context to the study of Islam with her particular focus on gender. She was even more interested to work with students to talk about how they become knowledge producers. How they challenge the knowledge that they receive to make sure that the knowledge will benefit them?

Finally, Prof. Amina Wadud also explains that in the context of Islam, it is true that around the time of the Abbasid dynasty, the contribution of women and non-binary persons began to be eclipsed by a predominance of patriarchal thinking. Patriarchy is neither unique to nor exclusive with Islam. It was a system based on a fundamental understanding that some humans are better than other humans. That's one of the reasons why there was a practice the institution of slavery even amongst Muslims because people thought that it was reasonable to deny certain rights and benefits to slaves, while at the same time never considering them to be equal to the master. In the 21st century, such an idea is no longer tenable, not only because the institution of slavery is abhorrent, but also because the fundamental idea of equality, the muscle and the Tawheed reciprocity between human beings is the only way for us to achieve what the scholars have unanimously agreed upon in Islam and that is that Islam is just.

Wadud argued, “If Islam is just, it must be just for all people. It must be just to this planet which for the moment is the only one we know that we can inhabit, and it must also integrate the metaphysical with the physical and that is that there is a dimension to Islamic knowledge which is not limited to just bites and bits of information but rather goes deep into the very core of what makes us human. When we understand our humanity, naturally, we should extend that understanding of humanity to all but not all are the same. Every person is unique. Arriving at the place where we affirm this dynamism is not of Islamic knowledge and this integration of that knowledge with the deepest level of human well-being is something, I have had the pleasure of living my life towards and something I look forward to a radical contribution, a radical challenge, and radical change in the way in which we perceive humanity and we contribute to knowledge.”