The Trend of Blasphemy in Indonesia 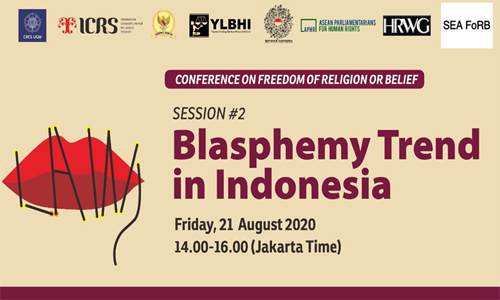 Asfinawati, on behalf of YLBHI, explained that, during the period from January to May 2020, YLBHI found 38 cases of blasphemy, which were scattered in several regions such as South Sulawesi, East Java, North Maluku and West Java. However, apart from the existence of these cases, Asfinawati highlighted that it is ironic that in Indonesia there is no standard definition of blasphemy, even in laws which are often referred to as legal grounds to ensnare the perpetrators of blasphemy. This includes Law. No. 1 of 1965, which is known as the PNPS Law; Article 156a (KUHP) frequently used in cases considered to be blasphemy; and Article 59 (3) of the Mass Organization Law; Article 28 (2) section 45a (2) of the ITE Law.

Because of this problem, YLBHI provides several notes that need to be considered in looking at cases of blasphemy in Indonesia. First, legal processes against perpetrators who are suspected of committing blasphemy are often carried out because they are under pressure from mass actions that demand an investigation and further influence the judicial process. The measure used by law enforcement is generally whether the case has gone viral or not. This is the case in recent issues of both hate speech and hate spin. Second, the reason for carrying out the legal process is also quite interesting, namely the threat of disturbance to public order. Therefore, a legal process is needed in order to deal with the public order and security issues. Meanwhile, it should be remembered that the cases of alleged blasphemy in Indonesia are also quite diverse, ranging from interpretations of religion, insulting religion, insulting the Prophet and his family, insulting spiritual songs, among others. Third, because the legal process is often influenced by public pressure, often the intentions or motives of the alleged perpetrators of blasphemy are no longer a concern. Due to this, there are procedural law issues, namely the absence of evidence or evidence that has no direct connection to the incident. The lack of incriminating evidence against the alleged perpetrator of blasphemy can suggest the evidence that exists has been fabricated.

Regarding the trend of blasphemy cases in Indonesia and the legal process for these various cases, Asfinawati and YLBHI offer several recommendations. First, it is necessary to remove the blasphemy articles in the Criminal Code and the Ormas Law because they do not meet the legality principle. Second, it is necessary to eliminate articles 27 (3), 28 (3) and 45a of the ITE Law so that there are not multiple interpretations of these articles which then criminalize freedom of opinion, religion and belief, or other rights of expression. Third, if the state intends to protect people, including religious communities, from acts of hostility, hatred based on ethnicity, religion, race, and other attributes, then the article on hate crimes and discrimination based on religion is more effective.

A. Taufan Damanik, chairman of the Indonesian National Commission on Human Rights, stated that it is important to pay attention to the issue of blasphemy when speaking on the issue of human rights in Indonesia. Taufan finds several problems as it concerns the blasphemy issue in Indonesia. First, the formulation of Article 156a of the Criminal Code tends to be ambiguous and have multiple interpretations. Second, often blasphemy is interpreted as a deviation from religious teachings. Defamation is interpreted as words or actions that are insulting. This has resulted in unclear court decisions, distinguishing the purpose of blasphemy from the abuse of religion due to the lack of strict standards to establish specific evidence of the court's qualifications of expert testimony. Third, political pressure and the majority community are often a very decisive element in the legal process of cases of blasphemy resulting in human rights abuses. Due to these concerns, Komnas HAM RI felt the need to create standards and norms related to FoRB issues, especially as it regards assessment and guidance on human rights principles and events. Komnas HAM recommended these standards to the Indonesian House of Representatives and the Indonesian government during the discussion of the RUU KUHP in September 2019

Furthermore, Ihsan A. Fauzi sees that the trend of blasphemy cases in Indonesia is closely related to a larger problem, namely the existence of 'legal wars' and the contestation of political interests that exploit religious issues. This does not only occur among the political elite. Rather, politicians take took advantage of the tensions at the grassroots level. Referring to Chaerian George’s concept of hate spinning, Fauzi finds that, in Indonesia currently, there is a trend of spinning hatred between religious groups. There are several signs of groups utilizing manufactured offense or hate spin. Certain parties loudly state that they are offended by the attitude of others, engineering an offense of supposed blasphemy. Fauzi argues that this is closely related to the existence of hate entrepreneurs who deliberately take advantage of cases of blasphemy for their own or group interests. The offense is then used to mobilize a larger crowd to demand judicial proceedings. The second characteristic of hate speech is that there is a gap between the actual case and the complaint for the legal process of the case. The victims of blasphemy cases are usually minorities. Seeing this reality, Fauzi argues that Indonesia needs a clearer legal basis to regulate the issue of blasphemy due to its relation to the distortion and mobilization of hatred.

Finally, Taufik Basari, as the fourth speaker, explained that the issue of blasphemy and the FoRB in Indonesia is a very complex issue. Taufik argues that this problem is not only related to the issue of law enforcement or laws and political dynamics, but the blasphemy issue is in the framework of a bigger and more serious problem concerning the development of human civilization. He further explained that in history there have been several judicial cases concerning the issue of freedom of religion and belief which are important to pay attention to, namely the case of Socrates in 399 BC, who was accused of introducing new gods and poisoning the minds of young people at the time. As a result, Socrates was convicted and sentenced to death. In the end, Socrates was seen and appreciated as the founder of basic concepts regarding modern philosophy and knowledge. Another case is the case of the heliocentric concept of Galileo Galilei, which differed from the beliefs recognized by the church. As such, the church punished Galileo because he is considered to have committed religious blasphemy.

From these cases, Basari showed that blasphemy has long been a contentious issue due to varied interpretations of what constitutes blasphemy. If someone's interpretation differs from the general interpretation then the problem of blasphemy will arise. For Basari, Indonesia’s handling of blasphemy cases, proper or improper, has implications for Indonesia as a civilization. Therefore, Basari suggests that Indonesia needs to make improvements in the social life of the community so that citizens learn to respect one another despite different religions and cultures. It is also necessary to make improvements in statutory regulations related to this issue so that regulations and laws do not become a source of problems. As it is now, the lack of clarity and potential for a multitude of interpretations serves to ensnare people in the vortex of purported blasphemy.